Compared to many other churches in Europe and elsewhere in the world, 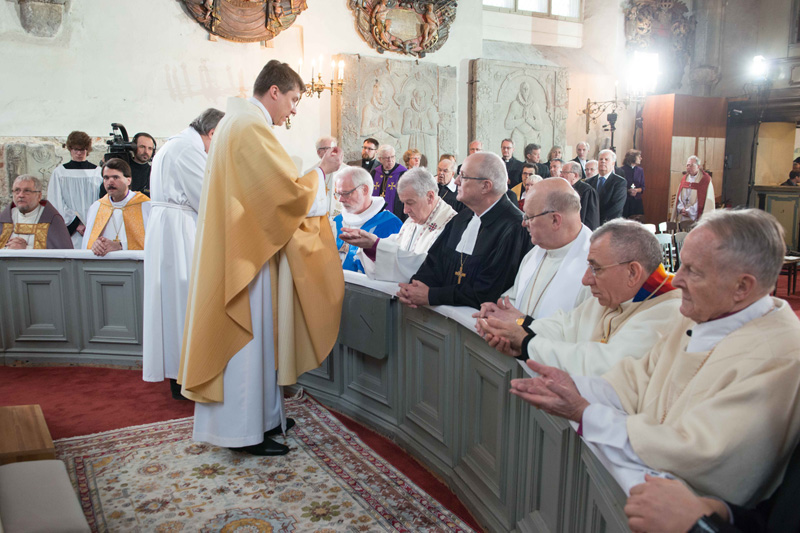 the Estonian Evangelical Lutheran Church (EELC) is rather small in terms of numbers but not in terms of international relations. We are a small church with big relations. International and ecumenical openness has been a characteristic trait of the EELC from the very first years of independence. Ultimately, openness to others is an attitude, which is based on our faith, but its development has probably been facilitated in several respects by our status as a ‘boundary church’ – we are located on the boundary between Eastern and Western Christianity, as well as on the boundary of different Lutheran traditions of Northern and Western Europe (Germany in particular).

The importance of international communion and cooperation for the EELC can be seen in the fact that it has been a founding member of several communions and organisations. Having escaped from the atrocities of the Second World War, representatives of the Estonian church in exile were in 1947 among the founding members of the Lutheran World Federation, a global communion of 145 churches and 72 million Christians, as well as the World Council of Churches, established in 1948 and representing 345 churches of different denominations with 500 million members in total. At the European level, the EELC is a member of two communions and one ecumenical organisation: the Community of Protestant Churches in Europe (formerly known as the Leuenberg Church Fellowship, founded in 1973 and currently having about 100 member churches) from 1975; the Porvoo Communion of Nordic, Baltic and British Lutheran churches and British, Portuguese and Spanish Anglican churches from 1996 as a founding member; and the Conference of European Churches, with 115 member churches of different denominations, from 1959 as a founding member. 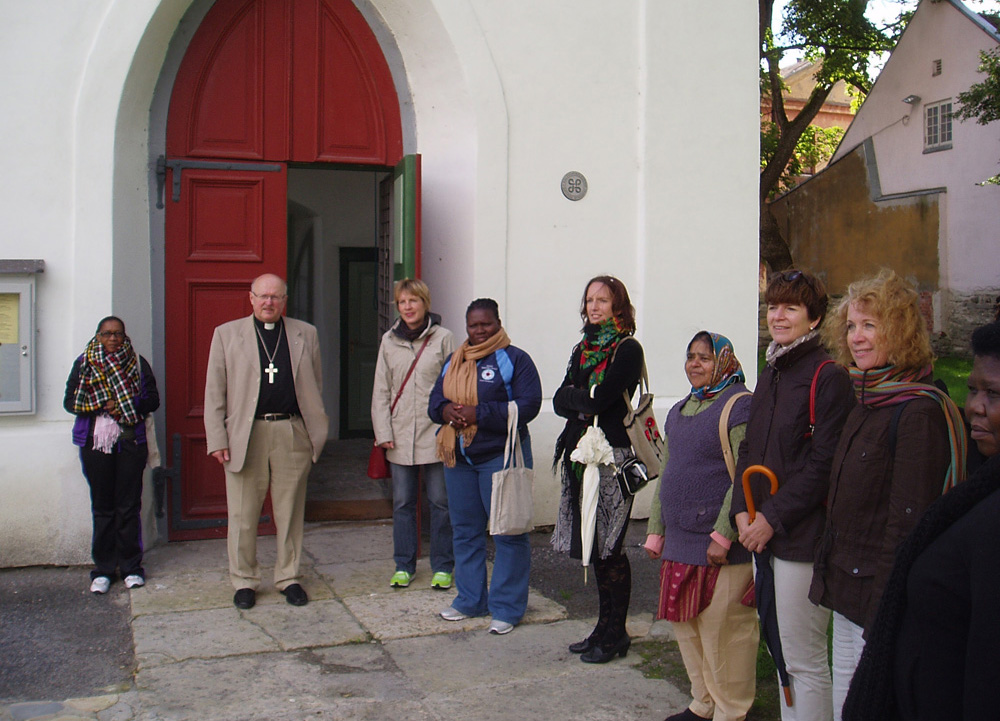 to the membership of various communions and organisations, the EELC is fortunate to have many friends and partners among fellow churches all over the world. The longest, broadest and closest relations have been established with partner churches in Finland and Germany (particularly the Evangelical Lutheran Church in Northern Germany and the Evangelical Church of Hesse Electorate-Waldeck), but we also have good friends in England (the Church of England), America, Russia, Latvia, Lithuania, Sweden, Norway, Denmark and Hungary. In recent years we have had more dealings with the Lutheran churches in Poland, Ukraine, Israel and Jordan and through our friends in Germany we have established contacts with fellow churches in Kyrgyzstan, South Africa, Namibia and India. The circle of our friends also includes aid organisations Gustav-Adolf-Werk, Martin-Luther-Bund, Evangelische Partnerhilfe, Estlandhilfe, Finn Church Aid and several mission societies and other associations (mainly in Finland and Norway). The aid they have provided over many years has enabled our church to accomplish many beautiful and important things.

The EELC has an extensive and multi-levelled network of external relations, encompassing the church government, the General Synod, the Clerical Conference, various bodies of the church, the deaneries and congregations, and naturally also relations between individual members. The cooperation with international partners covers all areas of church life: diakonia (social ministry), education, church music and liturgy, children and youth work, mission, management, media, architecture and arts, and diaspora work. It involves clergy and lay members, young and old.

Diaspora work, i.e., the spiritual ministry among Estonians living abroad in their native language, constitutes an important part of the church’s external relations. Fellow Estonians are served in Australia, England, Canada, Sweden, Germany, the USA, Finland, Russia, Latvia and Lithuania. Ministry among Estonians living and working in Brussels, Belgium, has been added to the agenda after Estonia’s accession to the European Union. While the EELC was described above as a small church, we could light-heartedly say that the EELC is a large and global church, based on the scope of the diaspora work. 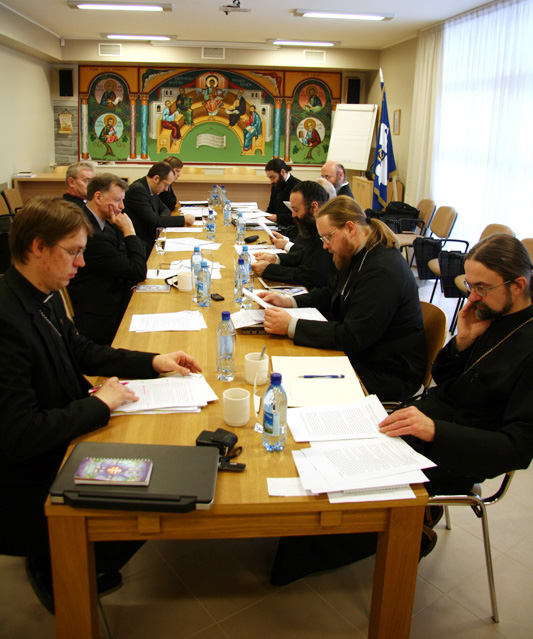 ile communion and cooperation at the international level are important, the same applies to our local level within Estonia. The EELC was one of the founding members of the Estonian Council of Churches (ECC) in 1989 and makes a significant contribution to the work of this organisation, which brings together the ten largest churches in Estonia. There are many shared initiatives in the fields of education, media relations, chaplaincy service, sociology of religion, ethical issues in society, etc. The churches hold joint theological discussions and organise ecumenical services. Together they also constitute a partner in negotiations with the state. In addition to the ecumenical relations and cooperation in the framework of the ECC, the EELC entered into official negotiations with the Orthodox Church of Estonia (OCE) in 2006. These are the first official negotiations between Orthodox and Lutheran Christians in Estonian history. The negotiations resulted in the signing of a joint declaration on “Eucharist and Divine Service” in 2013. The OCE is also an official cooperation partner of the EELC in the field of higher theological education. Many members of the EELC participate in the work of the Estonian Evangelical Alliance.

Why are these relations important for the EELC? 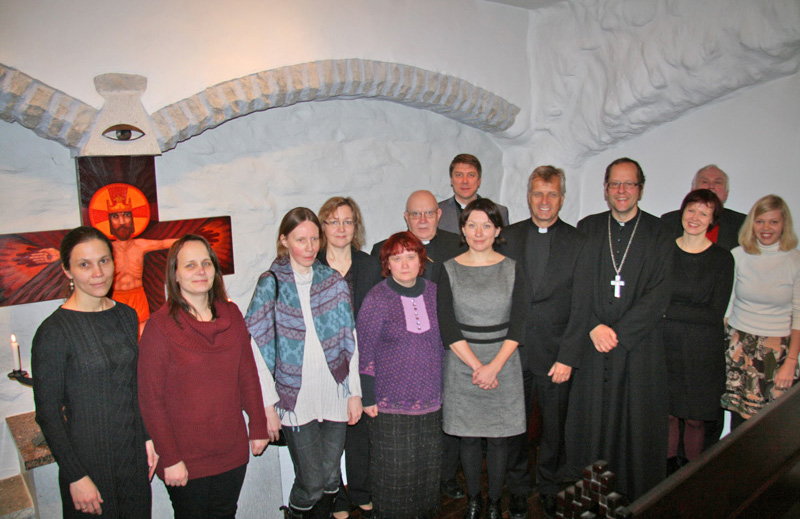 ing a member of a faith communion means a full communion, i.e., pulpit and altar fellowship (mutual recognition of ordained ministers and joint celebration of the Eucharist), with all other members of that communion. For the particular relations of the EELC it means that we are in communion with almost all of our Lutheran partner churches through the Lutheran World Federation, in friendship and communion with the Diocese of Rochester of the Church of England through the Porvoo Communion; in communion with the Evangelical Church of Hesse Electorate-Waldeck (including both Lutheran and Reformed Christians) through the Community of Protestant Churches in Europe; as well as in pulpit and altar fellowship with the United Methodist Church in Estonia. Communion with other churches reveals our unity in faith; together we give witness to the world about God’s grace in word and deed – by proclaiming the gospel, loving and serving our neighbours and caring for nature. In ecumenical relations we, together with many other churches, express our desire for a more visible unity where it has not yet been achieved and for being united in love for our neighbours despite any remaining differences. Participation in the work of communions and ecumenical organisations and support for their initiatives at the global, regional and local level provides us with a voice and leverage in areas where we alone would not be heard or could not reach to offer our help. Furthermore, it has provided and continues to provide us with much support in being able to exist and grow as a church. We have also been greatly encouraged and supported by our partner churches and aid organisations. Their aid, often collected through voluntary donations, has helped us rebuild churches, renovate rectories, provide financial support for our clergy and congregation workers, etc. They have introduced diversity and freshness to our church.

Relations are inspiring and enriching us, they challenge us and provoke new thoughts, movement and change. They serve as a confirmation that we are a living church, a part of Christ’s body.

The field of international and ecumenical relations is overseen at the Consistory by Kadri Eliisabet Põder, Assessor of International Relations.

The field of diaspora work is overseen by Bishop Tiit Salumäe.