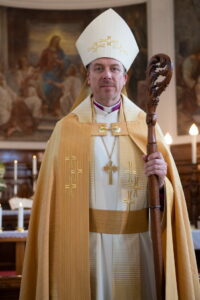 Blessed are the peacemakers, for they will be called children of God (Mt 5:9), said Jesus in the Sermon on the Mount.

Any war of conquest and subjugation against an independent state and nation is a representation of evil, with its inherent drive to strip away everything that is natural, human and cherished by humanity. People are deprived of their homes; they are separated from family members and can lose everything that we see as part of human dignity. A lot of innocent blood is shed…

A similar pattern of evil characterises the foreign and violent spirit of the regime that has launched a military attack on Ukraine. Having sought freedom and independence, the Ukrainian nation, innocent people, are forced to experience violence and injustice. Hundreds of thousands have fled their homes because staying would have meant endangering their own lives and the lives of their loved ones. Fathers, husbands and sons are fighting, paying the price of blood for freedom.

The EELC Consistory condemns the military attack against Ukraine, launched by Russian leadership. The war threatens Ukrainian independent statehood and has already led to thousands of casualties, including in the civilian population. In order to become children of God, our Lod Jesus Christ calls us to be peacemakers instead of waging war.

We are convinced that there is still hope for halting the power of evil and ending this war. Evil cannot rob human hearts of faith, hope and love. On this foundation we can build our future, even in the most difficult situations. Both in Ukraine and, one day, certainly in Russia as well.

Relying on Christian faith, hope and love we encourage the Ukrainian people with the words of an Old Testament poet: God is our refuge and strength. He makes wars cease to the ends of the earth. He breaks the bow and shatters the spear; he burns the shields with fire. The God of Jacob is our refuge. (Ps 46:2,10,12)

On behalf of the EELC Consistory,

Print
Statement by the Estonian Council of Churches and the leaders of its member churches regarding the hostilities in Ukraine and the reception of war refugees in Estonia >
< Archbishop Urmas Viilma´s sermon on February 24th, 2022