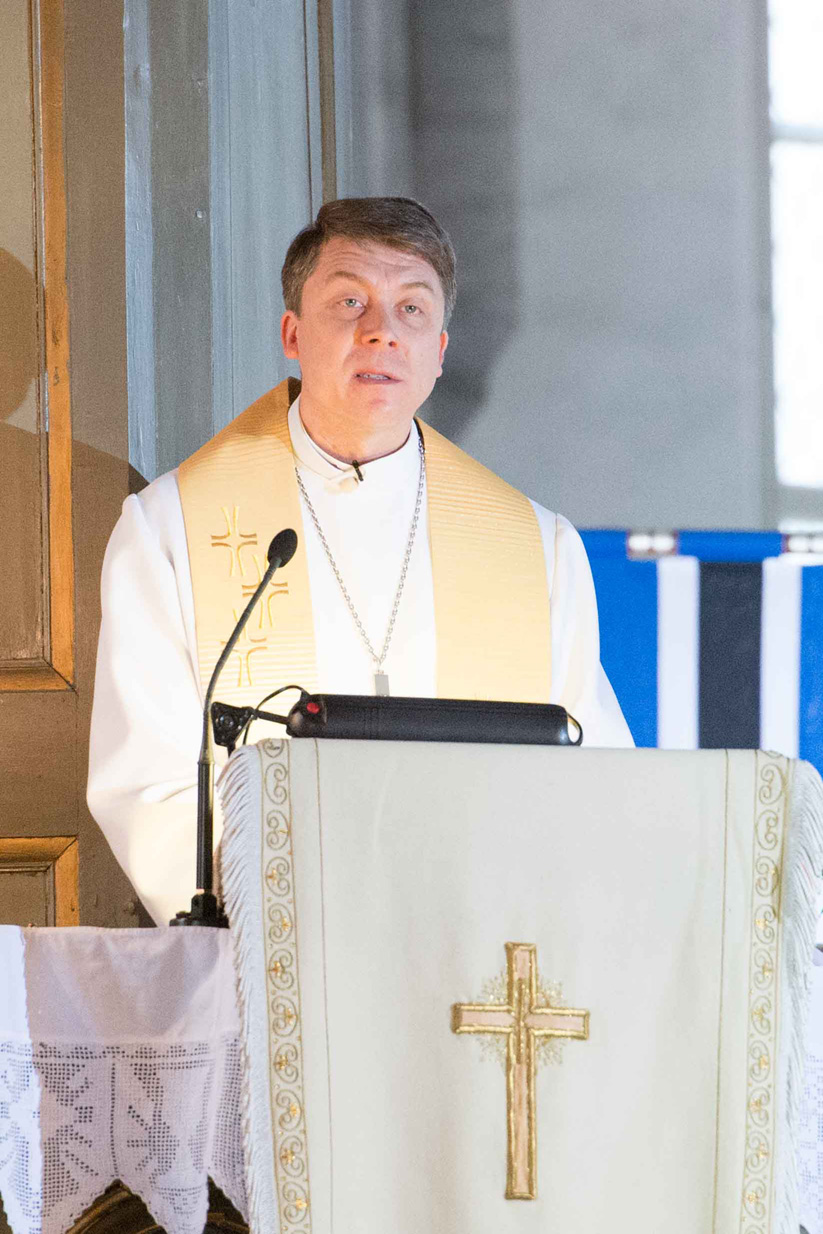 Archbishop of the EELC, the Most Revd Urmas Viilma

I repeat once more the words read by Jesus in the synagogue of his hometown of Nazareth, when he read the predictions by the prophet Isaiah: “He has anointed me to preach good news to the poor. He has sent me to proclaim release to the captives and recovering of sight to the blind, to set at liberty those who are oppressed, to proclaim the acceptable year of the Lord.” And Jesus added: “Today this scripture has been fulfilled in your hearing.” (Luke 4:18-19, 21)

The predictions and dreams of which prophets were fulfilled when the Republic of Estonia was proclaimed 99 years ago? Who were these prophets who predicted our own nationhood?

Was it the young writer Kristjan Jaak Peterson (1801-1822) who had just graduated from the theological faculty of the University of Tartu, who two hundred years ago wrote in his poem “Moon” speaking “the tongue of the land” seeking eternity “in the winds of song” and the human spirit searching for God “amongst the stars”?

Was it the poet Juhan Liiv, who a couple of decades before Estonian independence in the poem “O you people of jackets black” asked:

“When will it come, come the time,
when we, flags in hand, stand together,
when we sing to our freedom, [—]
when we give thanks for freedom!”

Juhan Liiv proclaimed a dozen years before the creation of Estonia in his poem “Will you show?” the prophetic words: “At one time there will be an Estonian nation!”

Even the great thinker, the clergyman Jakob Hurt was sure of the durability of our people, when in 1872 in an account of the work done for the good of the Alexander School wrote: “Estonians are not flies, who are born today and die tomorrow, but are an old and tenacious breed of people, who have already long ago in the world lived and will long after us still remain.”

In the second half of the 19th Century and the beginning of the 20th Century it was possible for those people with a sensitive political and nationalistic nerve to sense in the air the imminent independence of Estonia, just as all of us can predict rain before a thunderstorm on a warm summer day. One hundred years ago this “thunderstorm” that destroyed for a short while the empire spread out over us and to the east of us did arrive. With it arrived freedom from oppression and subjugation.

One step on this road to freedom was also the Estonian Lutherans becoming independent and the church designating itself as a Free Folk-Church for Estonians in the historical areas of inhabitation in Estonia and Northern-Livonia. To be autonomous in making decisions and teaching, to proclaim the Gospel and serve a free people in a free nation – this is the task that has been the enduring challenge for our church. For a century, this has also been the challenge presented to the Estonian people who are free to choose for themselves a religion and a church, yet through their language, culture and identity are still continually dependent on and bound together with the Lutheran history and heritage. Our Protestant-Lutheran identity which is the foundation of our people’s education, written and national language as well as self-determination as a nation-state can be forgotten and renounced, hidden and veiled as was done during the Soviet period; but it cannot be surgically removed from our national DNA. Be our Novembers however filled with goblins, damp and grey, or our Eves of St. John bright and filled with fun – we are a Christian people!

There is a temptation when recalling 500 years since the Reformation, the 100th anniversary jubilee of the Lutheran Free Folk-Church as well as the 100th anniversary of the birth of the Estonian nation to drown oneself in the past and remain sojourning in a puppy-girl-Lotte-like dreamland. Jesus liked to read and quote the centuries old prophetic predictions. He did so however from the perspective of the present and the future, drawing himself and his contemporaries out of the enchantments, fears and memories of the past. Quoting the prophet Isaiah, Jesus rocked his hometown’s routine safe lethargy. “Today this scripture has been fulfilled in your hearing.” These words caused in tiny Nazareth an uprising – a micro-protest. Jesus escapes barely with his life from the hands of citizens of his hometown.

Today, we often see such mini-revolts take place in the name of truth and on behalf of truth, even here in our ever-more-cohabiting and rail-Baltica-like Land of Mary, in the Old World diving into the unknown Brexit, as well as in the trumphant New World. In last while, all of us in one way or another have been shook up, sometimes even so much, that we in preparing to defend the truth are reaching out for a stone. Before casting a stone, it is wiser to stop and stand in order to understand that: Being different – the rocking of traditional and familiar boundaries – is sometimes the only method by which to start something new. Our goal should not be to cast aside the truths we have inherited and to feed the multi-truth stuffed with a plurality of opinions and subjectivity nor to think that we are freed from the fetters of truth to walk in a post-truth-era. The Tempter’s tempting us to come to such an understanding; yet the truth is the same yesterday, today and for eternity! We can only reform and re-envision our present understandings and principles so that truth may once again and much more clearly shine forth. Semper reformanda! Only truth can give birth to truth! And, for the most part this process is painful, as is giving birth …

Without Jesus’ death on the cross there would be no church of the cross, likewise there would be no proclamation of the love of neighbour and life everlasting! Without the reformation launched by Luther there would have not been so soon, in this corner of the world, education in the mother tongue nor a written language. Without education and language there would not be an Estonian people. Without the sacrifices of revolutions, the First World War and the War of Independence there would not be a century-old Estonian Republic nor its contemporary the Estonian Free Folk-Church. All these processes were painful and each in its own way sacrifice; but that which was achieved was beautiful!

Today, on the anniversary of the birth of the Estonian Republic, it is important to recall that neither the Estonian state nor the Estonian church are the goals in themselves. They are tools – instruments by which the people can be better served! State and likewise the church, are not realized through their leaders, but through their citizens and members, as well, they both are in the service of their citizens and members. The church is the Body of Christ, which in its earthly imperfection means its membership or its people, just as the state is formed by the same people. Thus the church and the state are united through the people. We serve without exception the same free people in the same free land!

Jesus closed the scroll and let those in the synagogue know that in him the words of Isaiah had been fulfilled, but only because he was the Messiah of whom the prophet foretold, that he was “anointed to preach good news to the poor, proclaim release to the captives and recovering of sight to the blind, to set at liberty those who are oppressed, to proclaim the acceptable year of the Lord!” In Jesus all that was realized!

Likewise the mission of the Estonian state will be sustainably realized only when we – as the preamble of the Constitution says – “with unwavering faith and a steadfast will” strengthen and develop the state guaranteeing “the preservation of the Estonian people, the Estonian language and the Estonian culture through the ages.” The guarantee for realizing this and at the same time the challenge is, freedom. Freedom is the prerequisite for a happy life, yet also a touchstone because freedom obligates. Freedom has the same genetic code as love! Only a truly free person can truly love the fatherland and mother tongue, as well as one’s neighbour, be it one who has arrived from abroad, as oneself. Likewise love God as the Creator of all, including freedom.

The apostle Paul writes in the already quoted letter to the Corinthian congregation: “Now the Lord is Spirit and where the Spirit of the Lord is, there is freedom.” (2 Corinthians 3:17)

Hold fast to the Spirit of God, hold fast to freedom, then our state and people will remain free!