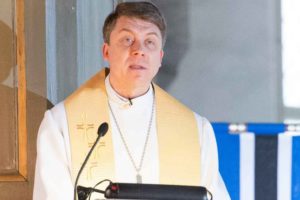 There are several passages in the Scripture that talk about time. The best-known and probably the most-quoted passage can be found in Ecclesiastes. The passage begins with a somewhat overused, but also timeless, observation that “For everything there is a season, and a time for every matter under heaven” (Eccles. 3:1), and concludes with the statement “a time for war, and a time for peace” (Eccles. 3:8), which seems particularly fitting today, on the 100th anniversary of the Tartu Peace Treaty. However, there is a moment for everything and everyone when the time has run out and they have no more years, months or days left. They only have a few seconds, counting down towards zero.

At the early hour of 00:45 on this date 100 years ago, the signing of the Tartu Peace Treaty marked the end of the War of Independence between Russia and the Republic of Estonia.  By that time, the weapons had been silent for nearly a month, from 10:30 a.m. on 3 January. The peace treaty entered into force on the day of exchange of the letters of ratification, which occurred as late as 30 March 1920. The text of the treaty contained the following stipulation about the moment of entry into force: „The Treaty will become valid immediately it has been ratified. Whenever, in the present Treaty, the moment of ratification is mentioned as the date on which the Treaty becomes valid, it is thereby understood that such moment is to be that at which the two Contracting Parties are mutually informed of its ratification.“

A moment can be a measure of the occasion of something happening as well as a measure of duration. According to various studies, the duration of a moment, or a blink of an eye, is three hundredths of a second. While the moment of signing and entry into force of the Tartu Peace Treaty lasted only for a blink of an eye, this moment was of invaluable historic significance for the past and future of the Estonian people. On 2 February 2020, the newspaper Postimees wrote: “It was a major historic moment when the peace treaty between Estonia and Russia was signed, likely the most important moment in the troubled 700 years of the history of our nation.”

Today, we are talking about hundred years of the Tartu Peace Treaty, but even that is nothing but a moment in the long story of time.  The Bible even talks about 1000 years of peace, while also noting that “with the Lord one day is like a thousand years, and a thousand years are like one day” (2 Pet. 3:8).

The time that God measures out to people and His grace are similar in that only God can determine their exact measure, and the criteria for doing so are only known to Him. Irrespective of whether we like or dislike this, it makes us all equal before God. In the end, time is always relative, and God is free to measure it out to us as He chooses. Compared to immeasurable timelessness, or eternity, any measurable unit of time is a mere moment, even if only lasts a 1000 years. This time can be meaningless and wasted if we do not put it to a good use, because people are not equal when it comes to the ability to make the best of time and of each moment. Some can only squander or waste the time that has been gifted to them, while others are able to spend it wisely and reasonably.

Today, we have reason to be grateful that Jaan Poska, the head of the Estonian delegation in the Estonian-Russian peace negotiations, also praised as the chief architect of the Tartu Peace Treaty, was able to use his experience, as well as divine wisdom, for making good use of the time and the moment that was gifted to him. Having lasted for many months, the negotiations seemed to be drawing out even further, seemingly with no end to the bargaining even though both sides were exhausted from war. These wise and diplomatically tactical negotiations resulted in the formulation of contractual clauses that were highly favourable for the young Republic of Estonia. All this required time in a situation where time was ‘running out’ in several respects. None of us knows whether Jaan Poska himself felt it as well. When addressing the Constituent Assembly on ratification of the treaty, Poska said: “As much as we are able to assess the situation, the peacemaking with the Bolsheviks was not a waste of time and paper.”

Today, we know that on the day of signing the treaty, the number of God-given days remaining to Poska amounted to only a little more than a month. Jaan Poska died at the age of 54 on 7 March 1920 when the Tartu Peace Treaty had not even entered into force. Thus, we can now gratefully observe that, a century ago, God was truly gracious to Estonia that had achieved peace – finally, the people had the chance to enjoy the freedom they had won.

“And I will be gracious to whom I will be gracious, and will show mercy on whom I will show mercy” (Ex. 33:19), said the Lord to Moses in the meeting tent. None of us knows why has God allowed us, as a nation, suffer so much injustice and violence in the course of our history, while also protecting us like His dearest children, leading us to freedom and independent statehood, just as He guided Moses to deliver the Israelites from the Egyptian captivity. But can we even ask a loving Father, why does he care for us or loves us? Does God need a reason to bestow His grace and love on us? How about our own relationships with our family members, strangers and neighbours? Does our love need an excuse or a reason? If we model ourselves on God’s love, then we should simply follow God’s selfless decision to love humanity. The Bible even indicates that God has, on several occasions, regretted His vengeful intentions for human beings and has changed His mind.

We have a very humane God. It would be nice to believe that it was the centuries of suffering of the Estonian people under foreign oppressors that triggered God’s regret. As a result, our small nation was gifted several advantageous moments that enabled us to declare the independence of Estonia in 1918 and to sign the Tartu Peace Treaty in 1920. We can find similar rare, gifted moments in history that helped secure the future of our land and people. The restoration of independence in 1991 was certainly one such moment. Perhaps also Estonia’s accession to the European Union and the NATO in the spring of 2004. I hope that God has not limited the number of such moments, just as He has not placed a limit on His grace and love. For us it is essential to know how to be grateful for this gifted grace, and understand, considering particularly the grim plight of many other small nations, that our independent statehood cannot be a self-evident assumption, as long as there are nations in the world whose leaders deem it acceptable to breach the promise of a peace treaty that was supposed to be valid for ever, not merely for a moment.

In this situation, we can rest our hope on the God of peace who gave the following promise to Noah after the Flood: “As long as the earth endures, seedtime and harvest, cold and heat, summer and winter, day and night, shall not cease” (Gen. 8:22). To confirm his promise, God concluded the first peace treaty in history – let us call it the Mount Ararat Peace Treaty. God said: “I establish my covenant with you, that never again shall all flesh be cut off by the waters of a flood, and never again shall there be a flood to destroy the earth. This is the sign of the covenant that I make between me and you and every living creature that is with you, for all future generations: I have set my bow in the clouds” (Gen. 9:11-13). The rainbow is like a seal on the eternal peace covenant between God and humanity.

Similarly, the Tartu Peace Treaty was affixed with personal seals of all parties. This explains the presence of a notably bright burning candle on the signing table, as seen on all photographs, even though the room was well lit by lamps that were used by journalists and photographers for their photo reports. Matthias Johann Eisen, who worked for the newspaper Postimees, recalled: “The parties were not content with merely signing their names, but they also lit the candles. Poska melted the sealing wax above the candle and, after it had been melted, pressed a seal on the wax on the peace treaty. The others followed suit” (Postimees on 2 February 1930).

The burning candle on the treaty table became one of the central symbols on the tapestry rug that was created by textile artist Anu Raud on the anniversary of the Tartu Peace Treaty and was presented a few days ago. This candle provides a symbolic tie-in to today’s feast of Candlemas and to the respective slogan in the liturgical calendar: Christ – the resplendence of the glory of God.

The Gospel reading for Candlemas recounts how Mary took Jesus, when he was 40 days old, and visited the temple in Jerusalem, where they were met by a righteous man, named Simeon. Having longed for the fulfilment of God’s promises for a long time, the old man took baby Jesus in his arms, praised God, and said:  “My eyes have seen your salvation, which you have prepared in the presence of all peoples, a light for revelation to the Gentiles, and for glory to your people Israel” (Luke 2:30-32).

The birth of Jesus, labelled as the light for Gentiles by righteous Simeon, had been foretold already by the prophet Isaiah, who gave him the title of the Prince of Peace, among others (Isa. 9:6), whereas Jesus in his own words described himself as the light of the world (John 8:12). Thus, the Candlemas message presents a meaningful encounter of peace and light. These two are merged in the eternal blessing that was bestowed on humanity in Jesus Christ. This blessing was valued highly by Jaan Poska as well. According to him, the greatest recognition he ever received for the Tartu Peace Treaty came on the street from an elderly woman, who had blessed him with the sign of the cross and said: “You saved our sons. God bless you for that!”

May the Prince of Peace and the Light of the World, our Lord Christ bless us as well on this day of celebration!