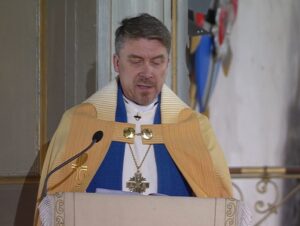 The Apostle Paul writes to the congregation in Colossae: Let the peace of Christ rule in your hearts, since as members of one body you were called to peace. And be thankful. (Col 3:15)

For the past thirty and a half years, we have been able to enjoy our continued independent statehood. On festive occasions, such as today, we like to give joyful and grateful speeches about freedom and sovereignty. But what about the days between festivities? Will we get bored of gratitude and grow tired of everything being more or less in order in the grand scheme of things? Will we start seeking out minute details that upset and spoil our mood, simply to make life more interesting or to draw attention to ourselves? It may even be something as trivial as the fog that occasionally occurs at our latitude, covering the entire land and cities and even the tomb of Kalev, making it difficult to see the exact colours of the tricolour flying at the top of the historic castle tower.

Family counsellors and conciliators know that it is often a minor detail that causes an outburst if a relationship has grown cold and disagreements have remained unresolved. One ill-advised word or act can become a trigger for lasting conflicts and long-term crises. A tiny spark can cause a great explosion. Just like a foreign object entering a functioning system can halt the operations of an entire factory or state.

From recent history, a tragic example of a minor detail causing a catastrophe was the space shuttle Challenger disaster on 28 January 1986. The shuttle exploded 73 seconds after taking off from Cape Canaveral, Florida. All seven crew members were killed, including schoolteacher Christa McAuliffe who had been selected as part of the Teacher in Space program. Instead of a 73-second flight, Christa McAuliffe would have by now seen 73 years of life. After returning from space, endowed with new knowledge, this teacher could have contributed a lot to the education of her people. Challenger’s fate was decided by a simple rubber O-ring that had become brittle due to freezing temperatures that are rarely seen in Florida. At the moment of launch, the O-ring did not withstand the pressure of hot gases in the solid fuel tank. The shuttle was destroyed in a ball of fire caused by leaking gases. The pieces fell into the ocean.

Is there currently an explosion hazard for people living in Estonia? What filters and O-rings should be double-checked to make sure that our society does not overheat and fall into the ocean like a wrecked shuttle, sinking the dream of a wise people? Will we be able to see the forest for the trees and notice the person behind a mask, so that we can continue to be competent and responsible in our shared mission as a state and a people to guarantee the preservation of the Estonian people, the Estonian language and the Estonian culture through the ages (preamble of the Constitution of the Republic of Estonia)?

Demonstrating is gradually becoming the new pastime in Estonia. As I have personally experienced, wearing a mask does not necessarily protect one from being infected with the virus. However, increasingly, a mask is becoming a useful filter against verbal pollution. But wouldn’t it be better to have something more effective, more conducive of a smile, as a filter in interpersonal relations? My colleague and monumental thinker, Toomas Paul, has proposed one such option as he writes: The telling of truth between persons requires a filter, and this filter is love. Caring for the other. Ultimately, what is said without caring for the other, without compassion, is no truth at all. (Toomas Paul, Tõe näkku ütlemine. „Sammhaaval astuda. Mõtisklusi hommikul.“ 2019). Therefore, in seeking peace we need to sow love, agreement, reconciliation and kindness. Truth is always most effective when it is proclaimed with love.

In a week’s time, the Western Churches commence the observation of the Lent. Christians have experienced that fasting can be a good way for calming down and seeking peace in general. It does not mean starving oneself for the sake of a better waistline, but it helps Christians to achieve original purity of consciousness through repentance and confession of one’s sins to God. The bodily restrictions combined with the search for forgiveness can enhance our ability to hear and see with our hearts. As the salt of the earth, Christians play an important part in this as role models. If the Word of God that we proclaim does not have a visibly life-changing effect on us, why would anyone else study the Bible at all? We need to demonstrate that faith in Christ changes us, our lives and deeds.

Fanny de Sivers has said: Fasting can also be an intense fight against corruption, depravity and dullness of mind. Also, against hopelessness. (Fanny de Sivers, „Paastuaja kirjad Eesti sõpradele“) As we fast, that is, liberate ourselves of everything that restricts us and tries to control us as an idol, we improve our ability to see the things that are not easily noticed in society. One does not even have to be Christian to do that. Repentance helps everyone to discover nice little things and to be grateful for them. By engaging in contemplation and by looking at the situation in Estonia as if through a mirror, we would be able to compile a long list of things to be pleased about. These things have made our lives better and happier: our culture and religion, our language and mentality, our nature and people – all this is something to be thankful for. We would be right in giving thanks for our freedom, including freedom of thought and religion.
A person who has repented and is refreshed, as if having been treated in the heat of a sauna, is able to look at life with clear eyes. As we turn the eyes of our hearts towards small things, our soul is filled with overwhelming gratitude for something that we can call freedom, especially on this anniversary of our independence. This freedom is also deserved by other peoples and nations that have come under threat in the changing world.
In 2020, the Estonian-Ukrainian folk group Svjata Vatra released a new record, „World, You Are Changing“, named after a song with the same title. This song includes the following words:

Why is the world not changing?
Mother without a son,
girl without a lover,
child without a father.
God gave and God has taken away!
War.

In the past, God’s gifts to Estonia have included courage for those who fought for freedom and wisdom for those who made decisions. The grace of God, the intelligence of decision-makers, the fighting spirit of heroes, and the people’s love for their land have guaranteed our independence. Today, this gives us a reason to express our joy in the words of King David: The Lord gives strength to His people; the Lord blesses His people with peace. (Ps 29:11)
In order to maintain peace, we must also make sure that none of our neighbouring nations and allies is drawn into war. In this curious age, when human pride and envy have placed Christian brothers on opposite sides of the front line, we need to call to God for aid and pray to Him for peace. That no mother would be without a son, no girl without a lover, no child without a father …
Tunne Kelam once said: There have been illusions of the capability of the modern man to cope quite well without God. However, experience teaches us that this void is immediately and aggressively filled by the creations of the human ego. (Tunne Kelam, speech „Maarjamaa 800“, 2015) The same can be said about peace. If we allow peace to be lost, it will be replaced by restlessness and fear that can ultimately end up in violence.
However, the Apostle Paul tells us: „Let the peace of Christ rule in your hearts, since as members of one body you were called to peace. And be thankful.“ (Col 3:15)

Print
Statement of the Consistory of the Estonian Evangelical Lutheran Church on the war in Ukraine >
< Archbishop Urmas Viilma: Violence has no power in the face of hope and laughter