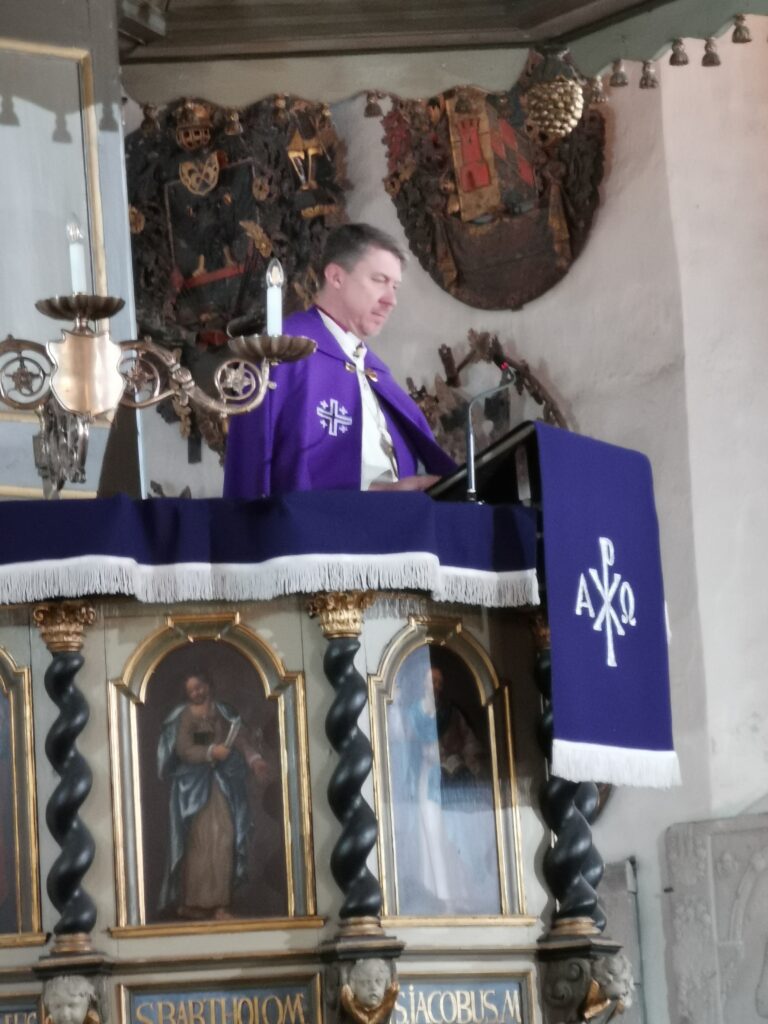 Independence Day, 103rd anniversary of the Republic of Estonia

Urmas Viilma, Archbishop of the EELC

“Owe no one anything, except to love one another. For the one who loves another has fulfilled the Law. /…/ Love never does anything that is harmful to its neighbour. Therefore, love is the fulfilment of the Law.” (Rom. 13:8,10)

On 27 January, global news outlets reported on a message issued by the Bulletin of the Atomic Scientists to world leaders, informing them that the so-called Doomsday Clock has been left at 100 seconds to midnight, the same position where it was moved to in January last year in connection with the onset of the COVID-19 pandemic.

The Bulletin of the Atomic Scientists was founded in 1945 by Albert Einstein and the scientists at the University of Chicago who had worked on developing the first nuclear weapons in the world. The annual decision on the position of the hands of the symbolic clock is made by the editors of the Bulletin. The Clock is moved closer to or away from midnight depending on the expected impact of the decisions of the global political leaders on continued existence of the world. In 1947, the initial position of the Clock was set at seven minutes to midnight. Two years later, in 1949, this position was changed for the first time by shifting the minute hand four minutes closer to midnight. It was the year of the first nuclear test in the Soviet Union.

The past year’s position of 100 seconds to midnight is the closest that the Doomsday Clock has ever been to the symbolic end of the world. The same critical situation continues in this year. The factors that influence the annual position of the clock include political instability in the world, global warming and nuclear threats, and recently also the COVID-19 pandemic.

Could the Estonian Academy of Sciences, in cooperation with the Estonian Council of Churches, start moving the hands of our own doomsday clock? Or would it perhaps be more appropriate in Estonia to measure the heat level in society with a symbolic thermometer that would alert us when we get dangerously close to the boiling point or overheating?

Be it as it may, we would need a reliable estimate of how well we have been doing in maintaining and working towards the ideal formulated in the Preamble of the Constitution of the Republic of Estonia – to guarantee the preservation of the Estonian nation, language and culture through the ages. Certainly, it should not be politicians who decide the position of such a clock or the level of the mercury column in the symbolic thermometer. Each new government always has a natural temptation to see the period of the outgoing administration as a time of shady deeds and label their own term in office as new enlightenment.

However, based on evidence, we can conclude that, in the history of our planet, there has never been a sunrise that has not been followed by a sunset, and vice versa. It is true that beyond the polar circle, it can take several months for the sun to set. Conversely, during winter, these regions have to survive months of apocalyptic darkness before the first rays of the sun return to the horizon. But life needs to continue equally in both periods. People need continuous care, support and guidance during both, day and night. Similarly, the preservation of the Estonian nation, language and culture must be guaranteed sustainably under the conditions of a sunrise as well as a sunset. In order for us to assess whether this is actually the case, it could perhaps be useful to start our local doomsday clock, which we could name affectionately as the Earth End Clock.

It would be absolutely essential, then, to ask someone to give a neutral but caring estimate of the position of the Estonian Earth End Clock today, on 24 February 2021 – almost 30 years after the independence referendum of 3 March 1991. Back then, 77.83% of the referendum voters answered ‘yes’ to the question, “Do you want the restoration of the national independence and sovereignty of the Republic of Estonia?” Before we make the next 30-year step in the history of our land and people, we may want to take some time to note our achievements, admit our mistakes, establish new goals and, only after that, start moving forward together with a renewed mentality.

If we want to reduce the polarisation in our society and heal the traumas suffered by various social groups, we all need to recognise each other’s different opinions and work hard to achieve cooperation, a peaceful life together and a sense of security. In the end, we need to be united in our focus on the preservation of the Estonian nation, language and culture, knowing that none of us has been given the right to exclude someone else based on any particular trait, leaving them on the other side of the invisible social dividing line.

During Lent, it is appropriate to recall that the one who tempted Jesus in the desert will make every effort to fragment the Estonian society and people based on the language they speak at home; the political party they elect; the god they believe in; the star sign under which they were born; the number of rainbow colours they perceive; the pension pillars they have chosen to rely on in their old age; whether they prefer mining oil shale, Bitcoins or harvest the wind; are they vaccinated or not; do they eat everything or are they vegan; are they fans of Ott Tänak or not; or do they wear a hat with trousers or with a skirt. Do all these questions even deserve our attention?

Sadly, we have not even been able to resolve somewhat simpler matter that divides people and opinions, namely, whether Jaak Joala should step out from a monument – and now also from a box – and sing his songs at the location where the sculptor Mati Karmin has placed his statue or remain forever behind the ‘iron curtain’ of memories together with all the work he created. The lyrics of a Jaak Joala song that is rarely played provide a painfully apt description of the current situation, lending the confusion around the monument a sorrowful undertone:

[I have a song and that is all I have left

And even that can be forgotten one morning

I know I am the way that I am

But I would be even less without that song]

The more we mature as a country and as a nation, the more confidence we have in imposing our individual interests, tastes, preferences and wishes on others. However, it also means that we owe each other an increasing debt in kindness and love.

Just like God’s Spirit that is everywhere, like the air that fills all holes and crevices, we need a bridge of love and trust to stretch over our numerous differences, the chasms between our worldviews and legal gaps. On this bridge of trust, we can step closer to each other without the fear of falling into hidden cracks or maliciously set traps.

However, the scientists who started the Doomsday Clock in 1947 wanted to remind humanity of something that Christians have never forgotten – the time given to us is limited. Time is transitory. The true Doomsday Clock was started by the first human being at the moment when he ate from the tree of the knowledge of good and evil and inherited mortality. This is when the countdown for humanity started. Before that, humanity had all eternity at its disposal.

Eternity cannot be measured. However, time can. The owner of time is God. He has entrusted us with this resource for a limited period and we have no right to waste it. It has been given to us so that we may settle our debts, achieve reconciliation, seek and offer forgiveness in our relations with friends, family members and like-minded individuals, as well as with strangers and intellectual and ideological opponents. In addition, we owe debts to the Estonian state, people and culture. These are debts that increase with every decision and act that is conceived to serve only the interests of the decision-makers themselves, or their supporters or ideological allies, whether in Estonia, in Europe or in a native village. Keeping one promise should not mean that we are entitled to break any other promises. This would only make it impossible to erase the debt of love.

“Love never does anything that is harmful to its neighbour. Therefore, love is the fulfilment of the Law,” (Rom. 13:10) writes the Apostle Paul. Keeping this in mind, we should live in the next year of independence – or, even better, in the next decade – without depriving any members of society of anything for the sake of giving something else to others, without leaving behind anyone who cannot keep up with our pace, without destroying the world of any of our fellow citizens while trying to build a new world for someone else.

Last summer I received a moving and at the same time thought-provoking letter from writer Jaan Kaplinski, our recent jubilarian, who expressed a simple request that could also serve as a parable for the functioning of a caring society. I quote: “I would like, health permitting, do some lobbying for the benefit of some living creatures. Since the old times, churches have had a connection with the birds that were called ‘steeple swallows’ by my grandfather, my first teacher of natural history, and that are now officially named as ‘common swifts’, even though I still think of them as swift swallows. They like to nest in hollows and cavities, often quite high above ground. So, they have found their nesting hollows and crevices in the steeples and walls of churches and other similar places. Such spots suitable for swift swallows are more common in buildings that have not been extensively renovated /…/ Therefore, my idea is that perhaps in Estonia [pastors] could think about time in this context and say something to the renovators/builders who renovate our churches, which in itself is a nice thing. The birds would be grateful and maybe even Francis of Assisi would look towards us with gratitude. He preached to the birds. I have a feeling that, at this time, the swift swallows are preaching to me. Perhaps to someone else as well.” (From the letter of Jaan Kaplinski to Archbishop Urmas Viilma, 19 July 2020)

Moving back the hands of the Earth End Clock and giving Estonia – and the entire world – hope for a better future starts from little steps that we all can make. If we start by changing our mindset and attitude, for example, by advocating for the preservation of the nesting places of swift swallows as well as for natural and social diversity, we can improve our ability to recognise and care for the entirety of God’s creation – on our land, among our people, in our home town or village, on our home street and with neighbours in our house, on the stony soil of Estonia, under the blue-black-white flag.

Until the Lord of time and eternity summons us to the heavenly residence that Jesus went to prepare for his followers, each and every one of our people should have a nest – a safe home and domestic peace here in Estonia.

Let us then leave this church today with this timeless and eternal piece of wisdom as a birthday present: if we love God, love nature and love our neighbour then we do not owe anything to anyone. Only in love are we truly free! Amen.