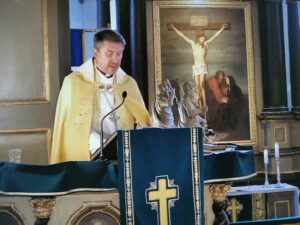 30th anniversary of the restoration of independence of Estonia

David praised the Lord in the presence of the whole assembly, saying, “Praise be to you, Lord, the God of our father Israel, from everlasting to everlasting. Yours, Lord, is the greatness and the power and the glory and the majesty and the splendour, for everything in heaven and earth is yours. Yours, Lord, is the kingdom; you are exalted as head over all. Wealth and honour come from you; you are the ruler of all things. In your hands are strength and power to exalt and give strength to all. Now, our God, we give you thanks, and praise your glorious name. But who am I, and who are my people, that we should be able to give as generously as this? Everything comes from you, and we have given you only what comes from your hand.” 1Chr 29:10–14

Greetings to all who have come to the church this holiday morning, to all dear friends!

During the last couple of weeks, various media have published many recollections of the events that took place 30 years ago, on the hot (in several meanings of the word) days of the restoration of independence of Estonia in August 1991. Everybody tries to recall and remember something, especially where they were at that time, what they were doing at that time, what they felt and what they thought. With a certain envy, we can listen what our fellow citizens who were present at the passing of the decision on independence remember of the most highly charged moments of that day. We also know that in those days, there were heroes not only in the Session Hall of the Supreme Council, but also elsewhere on the hillsides of Toompea and around the Castle, in front of the TV House and on the Freedom Square, around the TV Tower and in it. Besides that, there were heroes in many other places where it was necessary to show courage in standing for the freedom of our nation. Even in spite of the threatening clatter of chain tracks on asphalt that grew louder and louder. The doors of the churches were open, the candles were burning, people were singing and praying.

On 20 August 1991 at 11.03 p.m., the Supreme Soviet passed a historical resolution on restoration of the independence of the Republic of Estonia. The gavel strike of Speaker of the Supreme Soviet Ülo Nugis that confirmed this resolution and the applause that followed it in the Session Hall are an undisputed fact. It all has been recorded on a film, to be watched again and again.

What was the price of that, what were the agreements and negotiations, the events and processes that preceded this or resulted in this? Different opinions, memoirs and recollections agree considerably less on that. The disputes over which events and whose activities were the first, whose contribution on Estonia’s road to freedom is the most important and has the greatest impact will probably continue for years to come. Each article or book shows the views of its authors and points to their personal role in the story of how Estonia became free.

As regards that period of history, I myself as a young man who had just finished high school remember several years of demonstrations and singing of patriotic songs. If you ask which events I attended and which I did not, it is complicated to say. Although I had finished school during those times with quite good results, I had been confirmed and had also done all kinds of other things, it seems that at least every week it was necessary to take the flag and go by train from Saue to Tallinn in order to give my contribution and my young vibrant energy to the fight for freedom.

Strangely, my most vivid memories of the times 30 years ago and the events in August are not connected with the order of events or on whose initiative everything took place, but with how I in the physical sense suddenly felt this freedom that had been confirmed with a gavel strike.

In the early summer of 1991, I had finished gymnasium and submitted documents for starting my studies in the Institute of Theology of the Estonian Evangelical Lutheran Church. Entrance exams to the church institute that had not been recognised by the state but still operated through the whole occupation period took place a week after the restoration of independence, on 26–28 August in the 5th floor auditorium of the main building of Tallinn University of Technology, today’s TalTech.

Alone in an empty bus, riding downhill from Nõmme to Mustamäe, on my way to the exams, and looking at the empty streets, I realised with unexpected clarity that I would be a student and my studies would take place in a society and in a country that was free. Sitting on that empty bus to Mustamäe and facing a new stage in my life, the theology studies and church work, I realised that God had handed our people a treasure, which we have to use tenderly and with care. This realisation was awakening, like opening of eyes early on a summer morning.

One of the readings of today’s service is selected from the song of praise by King David in the 29th chapter of the 1st Book of Chronicles. David was handing over his kingdom that was still being built to his son Solomon after 40 years of reign. During the times of Saul, the first King of Israel, the people were constantly in war. King David, who followed him, brought peace. During the reign of the third King of Israel, David’s son Solomon, the Kingdom of Israel achieved wealth and glory.

David, who was about to finish his life’s work, realised after decades of ruling that the people were still serving God in a tentlike temple as during the 40-year wandering in the desert. For himself, the king had built a magnificent royal palace of cedar wood. Thus David, whose conscience had awakened, initiated a nationwide collection for erecting the Temple before handing over his power to his son Solomon.

In his song of praise, David admits: “Wealth and honour come from you [Lord]; you are the ruler of all things. In your hands are strength and power to exalt and give strength to all.” David then adds some words, and I want us to think of these words today, when we celebrate our freedom and independence: “But who am I, and who are my people, that we should be able to give as generously as this [for Your Temple]? Everything comes from you, and we have given you [back] only what comes from your hand.” (1Chr 29:12–14)

Everything comes from God, and even what we want to give back to Him comes from God Himself! We ourselves have never had anything. Have we realised that one day we can take nothing more with us from this world than what we held in the palm of our hand at the moment we saw light for the first time and were born into this world? When we are born into this world and when we leave it for eternity, our hands are empty. Everything we have today has been given by somebody else. Thus, when we go, we also have to leave so much for others that those who come after us can enjoy it as much as we did or even more. But where did the first human get free will, the freedom that could be left as inheritance or handed on to others?

Freedom in its original sense is God’s gift to humankind, which each new generation can accept as a bequest from their predecessors and hand over to their successors. A person who thinks that freedom can belong to them makes freedom cheap. Because all things that belong to somebody are property, they get a price and can be traded. The price for buying out such freedom can only be the blood shed in battles when it is necessary to prevent robbing of freedom and selling one’s national free will to some foreign “merchant”. The people of Estonia have had to pay the price of blood in the War of Independence to defend their freedom and protect it against being traded. Jesus shed His blood on the cross to redeem humankind from the slavery of sin that befell them through one fatal fruit.

30 years ago, we did not have to pay the price of blood for our freedom. Thank God for that! Therefore, we have to value our freedom even more as a gift today. Freedom has been given to us only with an indefinite right to use for as long as we are able to appreciate it, honour it and value it. In this way, we will remain a free country and free people. Even until the end of times. As long as we are able to value our freedom, we can consider ourselves belonging among the nations that have been chosen for freedom. Unlike the people who have perished in history, who have not achieved their independence, who long for freedom and strive for it but have not found it yet. If they are not doing it themselves, somebody else is trading with the freedom of these peoples.

Today, we have to admit like King David: “Wealth and honour come from you Lord; you are the ruler of all things. In your hands are strength and power to exalt and give strength to all. Everything comes from you, Lord.”