Archbishop Urmas Viilma: Our flag is an eloquent reminder that Estonia lives and breathes 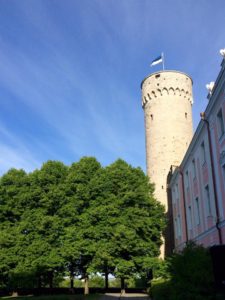 At the foot of Tall Hermann Tower, Toompea

On the 30th anniversary of the restoration of independence, 20 August 2021

The last months and weeks have brought us conflicting news, where the flag as a symbol has played its part.

Estonian fencers brought back many medals with differing brightness from the Summer Olympics in Tokyo. I remember how during the first Olympic Games after regaining our independence, in 1992 in Barcelona, our eyes scanned the TV screens for the Estonian flag. It felt incredible to see the Estonian flag next to the names of our athletes. When Erika Salumäe stepped on the highest pedestal and the Estonian anthem rang out, the feeling of elation was so great that even seeing our flag hoisted upside down could not spoil the pure joy.

Less than a week ago we received distressing news from the media that almost all countries are evacuating their diplomats from Afghanistan in fear of the new regime. Countries closed their embassies. The flags were lowered and packed up.

Estonia did not have its own embassy in Afghanistan. However, the Estonian contingent had left Kabul already a couple of months earlier. Our unit also ceremoniously lowered the Estonian flag when departing. During 18 years over two thousand members of our Defence Forces had served under the Estonian flag in that alien, dusty and rocky place. Fighting for the values and freedoms symbolised with the blue-black-white flag, which had been consecrated at Otepää parsonage, cost the lives of nine Estonian servicemen and caused injuries to several other.

Far from home, whether in Tokyo or Kabul, the flag symbolises everything that can be included under the concepts of home, family, fatherland, and freedom. The blue-black-white fabric also signifies our bogs and marshes, heights and fields, forests and villages, lakes and rivers, church towers and lighthouses, islands and city centres, and of course Song and Dance Celebrations. This means that everything that we call Estonia can be visualised with just three coloured stripes next to one another: blue, black, and white.

The blue-black-white flag that is hoisted to the top of Tall Hermann Tower every morning has been an eloquent reminder for more than 30 years: Estonia lives and breathes.

May Almighty God – the Father, the Son and the Holy Spirit – bless this flag, and our free country and its leaders and people. Amen.