Archbishop Urmas Viilma: our national flag was born on 4 June 1884 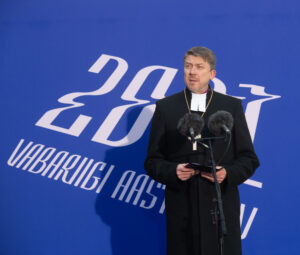 This year we celebrate the 140th anniversary of the colour combination blue, black and white.

The clergyman Aleksander Mäevälja (1857-1938), a participant in the event of choosing the colours, offered in 1934 an explanation in the newspaper “Postimees“ (no. 144, 30 May 1934):  “The colours were to remind us of who we are, where we are heading to, what we are striving for – the same should be known to others in the future: We are Estonians, we want to remain Estonians, for that we have a right and an obligation /…/ Is it not so that the blue sky covers our homeland, in the south we have blue-surfaced lakes, in the north in Viru County are the so-called Blue Mountains. The colour black took its place as a reminder of the dark and painful past of our people, the fertile black soil of the land, the black frock-coat of Mulgimaa and the black coals that produce a good fire.”  Further, Hugo Treffner (1845-1912) said of the colour white: “We ourselves strive toward the light and give light to the people. We should not be without the sunshine – let the colour white belong among our national symbols!” (ibid.)

Today, on the 103rd anniversary of the founding of the Republic of Estonia, all around Estonia we have raised the blue-black-white flags, so that under these sacred colours can gather all of the people of Estonia – from Vilsandi to the Narva River, from the Island of Mohni to the Uplands of Haanja.

Archbishop of the EELC