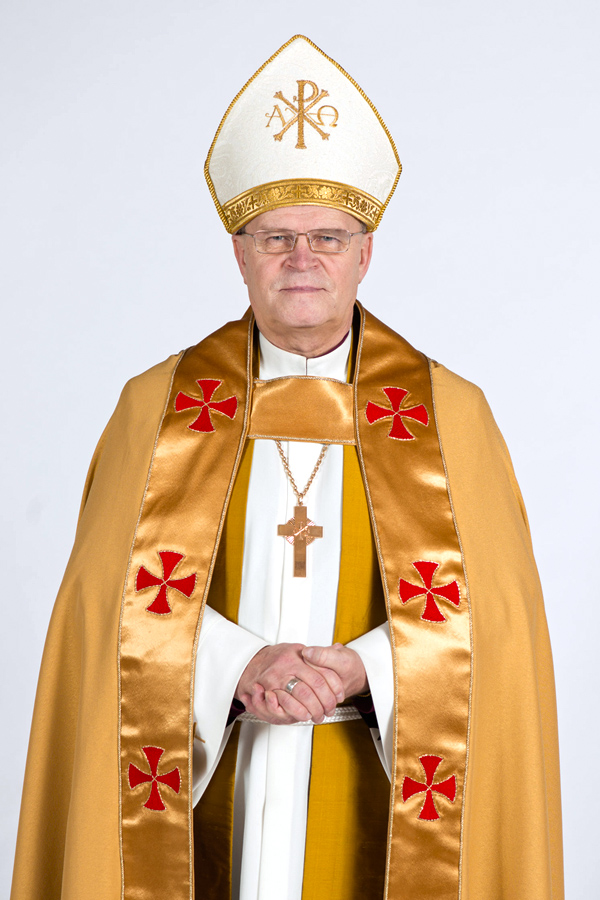 Andres Põder was born on November 22nd, 1949, in the community of Hanila in county Läänemaa. His father Johannes and mother Elviine were farmers in Karuse parish, Ridase village. In 1950, the family moved to live in Kohtla-Järve, in 1954 to Pärnu where he received his schooling. After secondary school, he began studies at the Theological Institute of the Estonian Evangelical Lutheran Church (EELC) in 1969 which he completed in 1980.

Andres Põder was ordained as a vicar on September 19th, 1976, by Archbishop Alfred Tooming in the EELC Tallinn Cathedral. He received the full rights to serve as a pastor on December 8th, 1980. Andres Põder has served several congregations of the EELC: 1976-1979 Viru-Nigula and Kunda, 1979-1983 Suure-Jaani and Kõpu, 1983-1990 Räpina and Mehikoorma, 1990-2005 Pärnu Elizabeth congregation.

While serving the congregations, Andres Põder has also served as the vice-dean of Võru Deanery, the dean of Pärnu Deanery and as a consistorial assessor.  He has worked in many church commissions, participated in the compiling of a new hymnal and the writing of a new constitution for the church, been a lecturer on ecclesiastical law at the EELC Theological Institute and served as a longtime member of the EELC General Synod.

On November 24th, 2004, the EELC XXVI General Synod elected Andres Põder as Archbishop of the EELC and Archbishop Jaan Kiivit ordained him into episcopal office on February 2nd, 2005.

The Archbishop has actively participated in community life, been the initiator of the Suure-Jaani Song Festival, been the patron for many music festivals and served as a gymnasium teacher of religion and philosophy.  Deeply involved in the heritage movement and in the establishment of the Estonian Christian-Democratic League during the „Awakening”, and also as a delegate to the Congress of Estonia, Andres Põder has emphasized the importance of being knowledgeable in subjects relating to church, history and culture.  As an active citizen, he has contributed to society as well as to the development of local government.

Since 2013, Andres Põder is the President of the Estonian Council of Churches.

Andres Põder is married to Marje Põder. They have two sons, a daughter (†) and four grandchildren. Their sons are both clergymen.

Estonian Heritage Society Portal Club founding member (1987)
Estonian Christian-Democratic League founding member (1988)
Delegate to the Congress of Estonia (from 1990 to its conclusion)
Pro Patria Union member (until 2005)
Pärnu City Council member and vice-chairman (1999-2005)
Pärnu City Council Education Commission chairman (2002-2005)
Member of the Estonian Music Academy Board of Trustees (1997-200)
Member of the Order of St. Constantine the Great (since 2001)
Patron of the Rapla Church Music Festival (since 2005)
Patron of the concert-series „Church Festivals in the Land of Mary” (since 2006)
Patron of the Suure-Jaani Music Festival (2008)
Chairman of the Jury for the Concept Competition for the Monument to the War of Independence (2006-2007)
Member of the University of Tartu Board of Trustees (2008-2011)

Honours and awards of merit