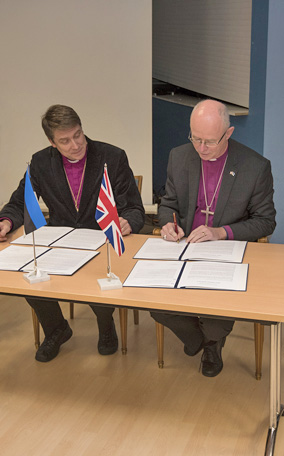 The Church of England and the Estonian Evangelical Lutheran Church are churches that have emerged from within the Christian Reformation in Europe, and are the established or national Churches.

The Diocese of Rochester maintains the partnership relationship with the Estonian Evangelical Lutheran Church on behalf of the Church of England. The Diocese of Rochester was founded in 604 as part of the missionary activity at that time. Justus, the first Bishop, was consecrated by Augustine, the first Archbishop of Canterbury. As such the Diocese has a long tradition of being part of the English, Holy, Catholic and Apostolic Church. The Cathedral was originally a Benedictine foundation, and that tradition is still valued. Much of the present building dates from the 11th Century.

The Estonian Evangelical Lutheran Church has its roots in the Western Catholic as well as in the German and Nordic Lutheran traditions. It is understood that in 1165 the consecration of Fulco as the first Estonian bishop took place. During the Christianization of Estonia in the 13th Century missionary activity was carried out by the Brethren of the Sword and thereafter a German order with its local branch, the Livonian order. Under Danish rule, during the 13th and 14th Centuries, the Bishopric of Tallinn was within the Archbishopric of Lund, which though in Sweden, was part of the Danish Kingdom. During the 1520’s the Lutheran reformation from Germany reached Livonia and Estonia. During the 16th and 17th Centuries Estonian lands were under Swedish rule and after that, part of the Russian Empire. In 1917, the year when the empire broke apart, the local church here became the independent Estonian Evangelical Lutheran Church. Its structure was reorganized as a Free Folk Church with an episcopal-synodical structure. The first bishop, Jakob Kukk, was consecrated in 1921 by the Primate of the Church of Sweden, Archbishop Nathan Söderblom.

At the invitation of the Archbishop of Canterbury, Cosmo Gordon Lang, ecumenical dialogue between the Church of England and the Estonian Evangelical Lutheran Church together with the Latvian Evangelical Lutheran Church took place between 1936 and 1938. In 1938 the three parties involved reached an agreement on altar- and pulpit fellowship, which they initialed in Tallinn. The agreement was ratified by all three churches, but due to the outbreak of World War II the receiving of the report by the Lambeth Conference was delayed until 1948. By that time, active and full fellowship was no longer possible since the Soviet Union in 1940 had occupied the independent Republic of Estonia. However, the Church of England welcomed displaced persons who fled Estonia during the war. Estonia affirmed its independence during the collapse of the Soviet Union in 1991.

After the formation of the Porvoo Communion, the Diocese of Rochester and the Estonian Evangelical Lutheran Church established a link with the prime purpose of sharing common discipleship in Christ and deepening their friendship.

We believe God has brought about this communion and calls us to manifest this through a covenant in the name of his Son Jesus Christ, and in the power of the Holy Spirit. We therefore:

Ways in which we might achieve these aims could include: